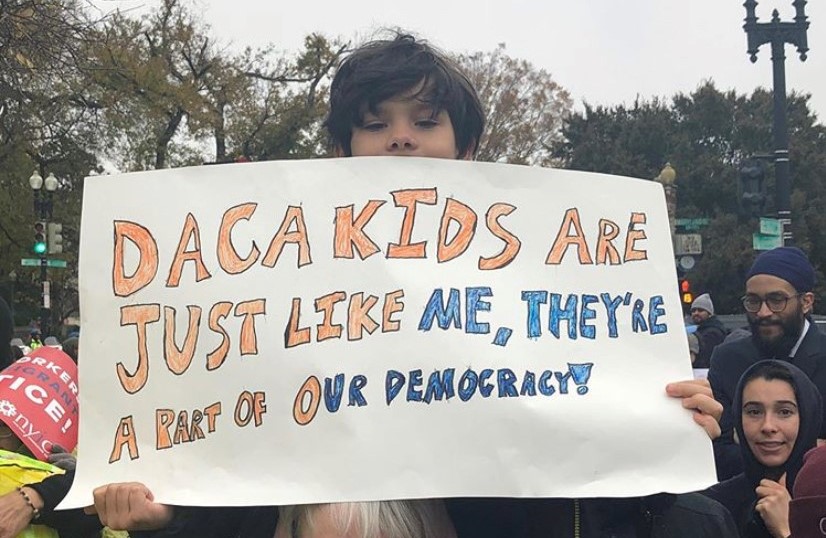 Yesterday marked a critical moment in the litigation effort to protect the Deferred Action for Childhood Arrivals (DACA) program, and the steps of the U.S. Supreme Court were crowded as the Court prepared to hear oral arguments in the fleet of consolidated DACA cases.

It was a joyful sight—Dreamers with the #HomeisHere and #HeretoStay campaigns stood shoulder to shoulder with their families and allies; little leaders held big signs; and banners offered words of support and love in English, Spanish, Korean and many other languages. Onlookers were reminded that this scene is what democracy—and America—looks like.

Yesterday also marked one week since a bipartisan group of Senators and Representatives introduced the Family First Transition Act, which gives us an opportunity to reflect on the promise this government has made to children. When the Family First Prevention Services Act (Family First) was signed into law in February 2018, it acknowledged that children do best when they are able to remain in strong and healthy families. It also made landmark changes to child welfare laws, offering enhanced early intervention services to support and strengthen families so children can stay safely at home. In other words, while one arm of government has renewed its commitment to family preservation, another appeared in court to effectively argue against it.

More than a quarter of a million children have at least one parent who is a DACA recipient. Canceling DACA increases the risk of family separation and is in direct contrast to the fundamental promise of the child welfare system that every child should have the opportunity to grow up in a safe, stable and loving family. The Supreme Court must keep this in mind when weighing the arguments it heard yesterday.

In October, we joined a friend-of-the-court brief representing the interests of DACA beneficiaries’ children. You can read that brief here.