CDF-Texas has worked tirelessly for the last decade to convince Texas legislators to expand Medicaid to low-wage Texans, to no avail. Texas currently boasts the largest number (5.2 million) and rate (18.4%) of uninsured people in the country in every age group. More than one-third of non-elderly adults lacked health coverage in 2019, including nearly one million children.

More alarmingly, nearly 3 in 4 Texans in the Medicaid coverage gap are people of color. It’s no coincidence that eight of the 12 remaining non-expansion states are in the South. Lawmakers have continued to deny basic, affordable health care to Texans of color, and their decision is no less than a modern day expression of the South’s legacy of slavery, with far-reaching consequences for our children.

There is ample evidence that when parents have health coverage, children are more likely to get enrolled, stay enrolled, and have access to healthcare. We must expand health coverage for low-income families to improve the wellbeing of Texas’ children.

That is why CDF-Texas is now one of the many organizations urging Congress to enact a federal fix to the coverage gap. Congressional leadership has already promised to include this in the next budget reconciliation bill; CDF-Texas and our partners will work to hold them to it. Thousands in Texas alone have died of preventable causes in recent years. Without Congressional action, the now decade-long fight for coverage expansion will continue on—in other words, Americans living in the 12 non-expansion states could be waiting another decade or more for basic, life-saving care.

Texas advocates have made great progress in this work over the past 10 years. We have the support of the business community, a bi-partisan majority in the Texas House, and nearly 70% of Texans, including 50% of Republicans.

Our work is also rooted in the voices of Texans in the coverage gap. Like Trish, an essential healthcare worker with a life-threatening chronic illness and single mom to a son with the same condition. Or Amber, a student at the University of Houston and a frontline worker at a grocery store chain trying to build up her life without health coverage to fall back on. And Gloria, a single mom who struggles to keep herself healthy while working part-time without health benefits in order to care for her children, two of whom live with disabilities.

We are proud of the progress we’ve made, but we cannot ask Trish, Amber, Gloria, or the 1.5 million Texans in the coverage gap to wait any longer. We are grateful to the advocates, legislative healthcare champions, and partners—including those in expansion states—standing up for this moral, just, and necessary action.

Join us in helping those in the coverage gap by taking action now and sending an email to your Congressional representatives here. 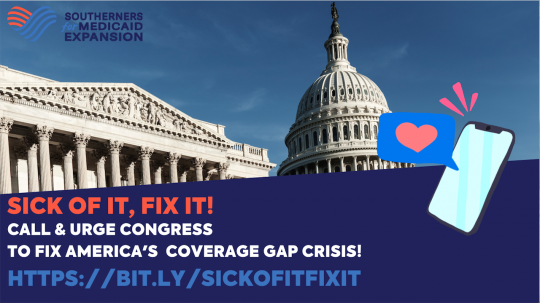