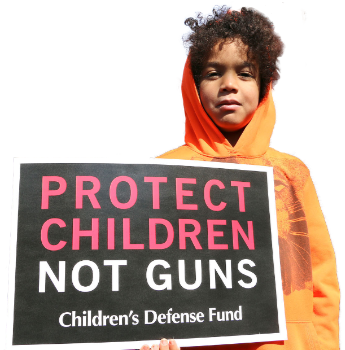 Even before COVID-19, another epidemic was killing our children at higher rates: gun violence. Gun violence was the leading cause of death for all children and teens ages 1-19 in 2018, surpassing motor vehicle accidents for the first time in history.1 Children and teens are far more likely to die from gunfire than COVID-19,2 yet our leaders continue to allow gun violence to go uncurbed and gun laws to go unchanged.

After years of congressional inaction, a growing number of children are paying with their lives. In 2019, 3,371 American children and teens were killed with guns—enough to fill more than 168 classrooms of 20 (see Table 35).

Shamefully, gun deaths reflect only part of the devastating toll of America’s growing gun violence epidemic. Many more children and teens are injured than killed with guns each day in our nation.

Gun violence affects all children, but children of color, boys, and older youth are at greatest risk.

No child is safe in a nation with easy access to deadly weapons. Even before the pandemic drove up fear and gun sales, there were too many firearms in our homes and streets—and a shocking number were sold without background checks.

Children are learning there are no safe spaces in our gun-saturated nation. Many children even live in homes with loaded, unlocked guns and know where they are kept. Too often, this leads to tragic accidents and preventable deaths. With a growing number of children learning and playing at home during COVID-related closures, the risk of gun accidents and suicides has only increased.

It is long past time for leaders to end America’s gun violence epidemic. Congress must urgently pass common-sense gun safety measures like universal background checks and child access prevention laws to protect children from firearms in their homes, schools, and communities. All children deserve the chance to live, learn, and play safely—free from violence and fear.

The pandemic has created and exacerbated so many crises for children and families and gun violence is no exception. Unprecedented increases in gun sales—coupled with financial insecurity, social isolation, and other stressors—are magnifying America’s gun violence crisis.

The COVID-19 crisis has exposed the consequences of our nation’s longstanding failure to pass policies to keep children safe where they live and learn. Our leaders must not only advance meaningful solutions to address the COVID-19 crisis but also the ongoing gun violence crisis in America. We cannot allow children to die at the hands of these crises.