WHO BENEFITS FROM THESE IMPROVEMENTS

CDF’s policy improvements would help children of all ages, races and ethnicities in all regions of our nation.

According to the Urban Institute’s analysis, this policy package would reduce child poverty as measured by the Supplemental Poverty Measure (SPM) at least 57.1 percent, lifting 5.5 million children out of poverty and increasing the economic resources of an additional 3.6 million poor children based on 2015 data (see Table 3.1). These combined policy improvements would have broad impacts, reducing poverty by: 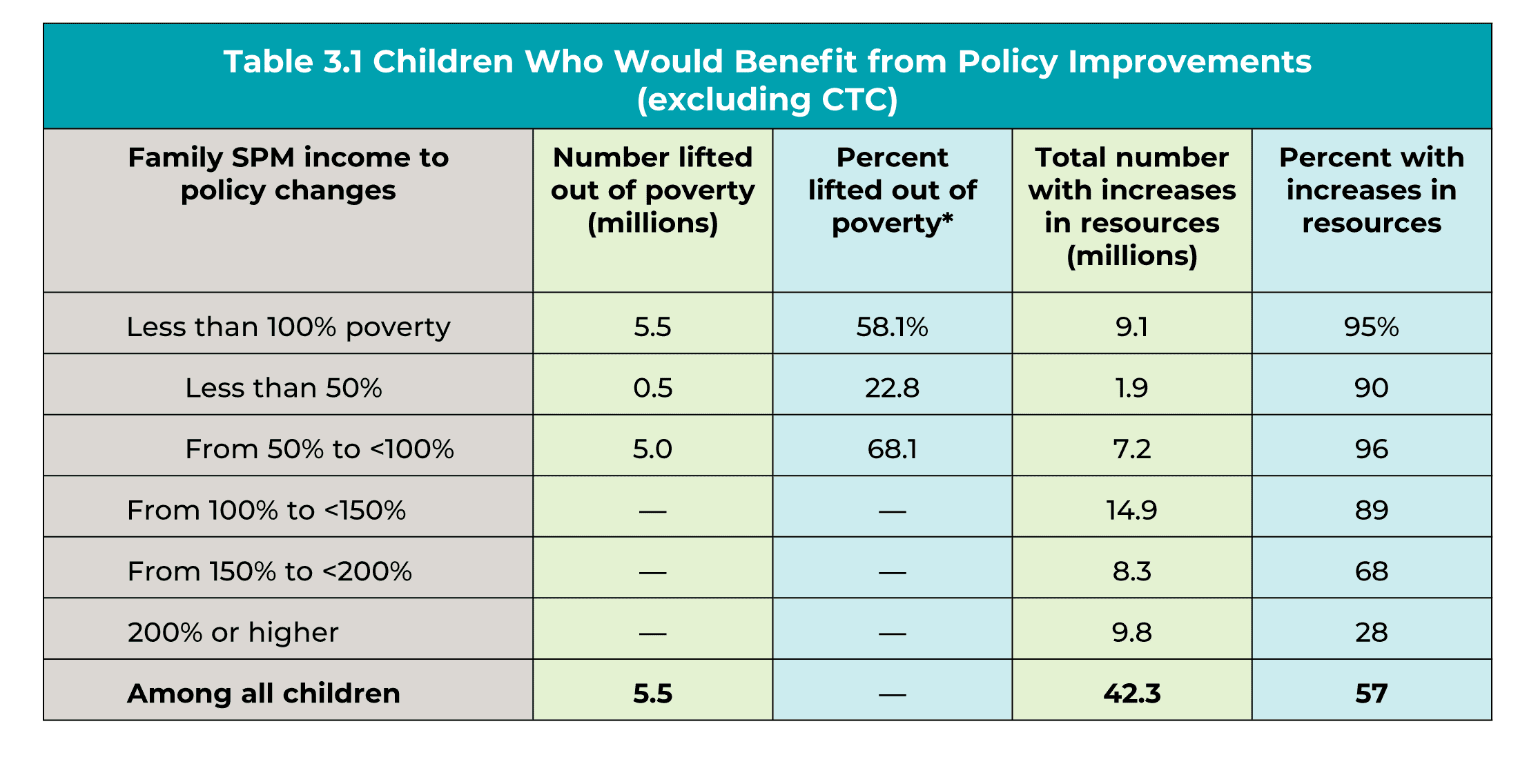 A total of 42.3 million children would benefit.

In addition to helping 9.1 million poor children, CDF’s proposed policy changes would improve the economic well-being of 33.2 million children in families above 100 percent of SPM poverty—half in families with incomes between 100 and 150 percent of poverty (see Table 3.1). The average resources of all families with children would rise about $5,887, with a larger average increase of $11,587 for extremely poor families with children. A total of 42.3 million children—57 percent of all children in America—would see their family’s economic resources increase as a result of these combined policy improvements.

Although these policies are primarily aimed at reducing child poverty, they also would reduce poverty among working-age adults 25 percent, the elderly 4 percent and the entire population 29 percent. A total of 1.8 million people in families with children would gain jobs from the transitional jobs program and improvements to the Earned Income Tax Credit, child care subsidies, minimum wage and the Child and Dependent Care Tax Credit proposals.

These policies would reach children in families below 50 percent of the poverty line, cutting extreme child poverty at least 58 percent.

These policies would help children of all races and ethnicities with Black children experiencing the greatest benefits.

These policies would help the youngest children most.

Children in America would benefit wherever they live.

Rural and urban children would benefit equally with child poverty reductions of 57 percent in non-metropolitan and metropolitan areas. Individually, however, the impact of each policy would differ by urbanicity. Six of the individual policy changes would have a greater impact in suburban and rural areas. Only one policy proposal—expanding housing vouchers—would yield larger urban child poverty reductions (see Appendix Table A4.3).

The combined policy improvements also had similar impacts on child poverty across different regions of the country, with the South and Northeast seeing only slightly larger impacts than the West and Midwest regions (see Table 3.2).

Who are the 5 percent of poor children who would not benefit from this policy package?

While this package would lift at least 57.1 percent of children out of poverty and reduce poverty among 95 percent of all poor children, roughly 500,000 children would not benefit. Some may live in families eligible for assistance or tax credits that do not claim the benefits for a variety of reasons including a lack of awareness or bureaucratic barriers. Immigration status may explain why some children would remain poor, as some policies and programs in this analysis benefit only citizens and authorized immigrants. Some children may live with adults with disabilities unable to work. Full eradication of child poverty will require more targeted assistance to hard-to-reach families.

The Urban Institute computed impacts of CDF’s policy improvements in California, Florida, New York and Texas, which together are home to nearly 40 percent of all poor children based on the Official Poverty Measure (OPM). Although large reductions in child poverty would occur in all four states, the impacts of these combined policies would be greatest in Florida and California. The impacts of individual policies would also vary across these states (see Appendix Table A4.4). Increasing SNAP benefits, providing transitional jobs and passing through and disregarding child support would have the greatest impact in Florida. Expanding housing vouchers would have a particularly substantial impact in California, reducing child poverty by nearly 40 percent in the state. Raising the minimum wage and increasing the EITC would have the greatest impact in Texas, while expanding the CDCTC and child care subsidies would have the greatest impact in New York.

How the Urban Institute Assessed Impacts of CDF’s Policy Improvements

The Urban Institute modeled the one-year impact of the proposed policy improvements using TRIM3, a validated microsimulation model of the tax and benefits programs affecting U.S. households. TRIM3—which models the U.S. non-institutionalized population based on U.S. Census and federal program and tax data—is a well-respected tool used for over 40 years to assess the operation of the U.S. safety net and estimate potential impacts of changes to safety net programs and policies. The model is developed and maintained by staff at the Urban Institute with funding primarily from the U.S. Department of Health and Human Services, Office of the Assistant Secretary for Planning and Evaluation.

This analysis was based on data representing the U.S. in 2015, the most recent year of data available for use within TRIM3 at the time of the simulation. All policies in place in 2015 were assumed to be in effect in the simulation. The estimated anti-poverty effects and costs therefore reflect the single-year impact these policies would have had if they were fully implemented in 2015. All listed costs are in 2015 dollars. While the economy has improved since 2015, the number of children below 100 percent of the official poverty threshold has decreased only 13 percent from 14.5 million in 2015 to 12.8 million in 2017.

The impacts of these policy proposals on child poverty were measured using the Supplemental Poverty Measure (SPM), an alternative poverty measure developed by the U.S. Census Bureau and the Bureau of Labor Statistics based on a broader range of income sources and costs than the official poverty measure. While the official poverty measure counts only earnings and cash benefits (such as social security and unemployment benefits), the SPM also counts in-kind benefits such as food, housing and energy assistance and tax credits like the Earned Income Tax Credit (EITC) and Child Tax Credit (CTC). It also deducts expenses such as taxes and child care, commuting and health care costs, and accounts for variations in housing costs in different parts of the country. As a result, the SPM, unlike the Official Poverty Measure (OPM), is a more comprehensive measure of poverty that accounts for the impact of government anti-poverty programs and policies CDF wanted to measure (see Appendix 3 for details).

The only policy change not fully captured by the SPM is increased availability of child care subsidies. The amount families pay out for child care is subtracted from their resources when determining SPM poverty. Thus, if families were previously not paying for child care or paying very little, the child care subsidy would not significantly affect their SPM rate. What the SPM is not reflecting in these cases is how families might now have access to more stable or higher-quality care.

Prior to the policy changes, 13.0 percent of children—9.6 million in total—were poor in 2015 according to the Urban Institute’s SPM calculations. This child SPM estimate is lower than the Census’ SPM estimate of 16.2 percent because TRIM3 corrects for underreporting of certain survey-reported resources, including receipt of SNAP, subsidized housing, Supplemental Security Income and TANF. TRIM3 also uses a different methodology to impute taxes paid. Characteristics of poor children based on the Urban Institute’s analysis are presented in Appendix 3.