When the Son of Man comes in his glory…all the nations will be gathered before him, and he will separate people one from another as a shepherd separates the sheep from the goats…Then the king will say to those at his right hand, “Come, you that are blessed by my Father, inherit the kingdom prepared for you from the foundation of the world; for I was hungry and you gave me food, I was thirsty and you gave me something to drink, I was a stranger and you welcomed me, I was naked and you gave me clothing, I was sick and you took care of me, I was in prison and you visited me.”  –Matthew 25:31-36

“[The contemporary tendency in our society is] to compress our abundance into the overfed mouths of the middle and upper classes until they gag with superfluity. If democracy is to have breadth of meaning, it is necessary to adjust this inequity. It is not only moral, but it is also intelligent. We are wasting and degrading human life by clinging to archaic thinking. The curse of poverty has no justification in our age.” –Dr. Martin Luther King, Jr., Where Do We Go From Here: Chaos or Community?

Forty-nine years after Dr. King wrote this in his last book, we are still fighting to end the curse of poverty in rich America. Every new sign of progress gets us one step closer — but we must keep going and never give up until we reach the finish line.

Poverty data just released by the U.S. Census Bureau reveal child poverty declined last year to 14.5 million poor children from 15.5 million in 2014, one million fewer but still higher than before the recession began in 2007. The national child poverty rate declined from 21.1 percent in 2014 to 19.7 percent in 2015, a statistically significant decrease but nearly one in five children remained poor. Child poverty rates declined for White, Black, Hispanic, and Asian children and that is good news. Yet despite the good news, children of color are still disproportionately poor and comprise nearly 70 percent of poor children in America. One in three Black children and more than one in four Hispanic children were poor in 2015, compared to one in eight White children. They live in another America. In 2020, the majority of children in our country will be children of color, so when we deny them the basic necessities of life we are threating all of our futures.

Do we really want to continue to jeopardize the futures of our next generation and our national military and economic security which is being formed in the bodies and minds of our children today — all of them? It is a moral disgrace that children remain the poorest age group in the nation and one in three poor people in America is a child, and the one in five children who are poor continue to struggle with odds stacked against their success. The younger children are in America the poorer they are: in 2015 more than one in five infants, toddlers and preschoolers were poor during their years of greatest brain development. Nearly half of poor young children live in extreme poverty — at less than half the poverty level. Poverty hurts and the damage can last a lifetime. The research is so clear that the early years are critically important in laying a foundation for early childhood and adulthood. Why don’t we do what we know works and what is right to do? There is no more urgent need than ensuring a high equality early childhood development system for our children and this should be at the top of the agenda for all of our presidential and Congressional leaders.

While we applaud that one million children escaped poverty in 2015, America must stop having two classes of children with millions living in third world conditions. It is a national moral disgrace that millions of poor children languish and fall behind in our rich land of opportunity for some. Poverty is defined as an annual income below $24,257 for a family of four. Extreme poverty is half of the annual poverty level, or less than $12,129 for a family of four. There are more than 6.5 million extremely poor children in America — more than the combined populations of Alaska, Delaware, Montana, North Dakota, South Dakota, Vermont, Wyoming, and the District of Columbia. No family with a parent working full-time year-round should be poor in our nation. Yet in 2015, more than two-thirds of poor children had at least one family member who worked, and nearly one-third had at least one family member who worked full-time year-round. It is time to demand that all of our leaders in all parties at all levels create jobs, jobs, jobs with living wages that allow people to work with dignity and a high-quality child care support system followed by a strong education system that leaves all of our children ready for the future.

We can and must end child poverty. In our 2015 report Ending Child Poverty Now the Children’s Defense Fund shows how by expanding investments in nine existing policies and programs that work we could shrink overall child poverty 60 percent, Black child poverty 72 percent, and improve the economic circumstances for 97 percent of poor children. All of our national leaders need to be focusing on this and doing far more to see that child poverty is ended. We all need to vote in November and then hold our leaders accountable for their action or inaction to end child poverty now and prepare our children and nation for the future. 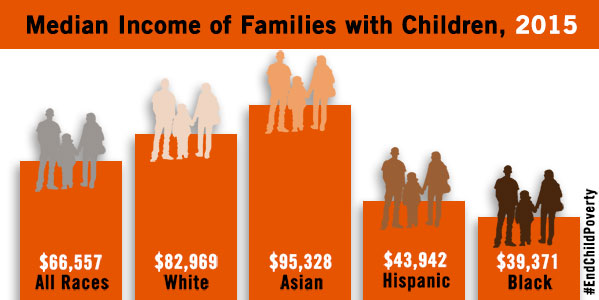 A child’s chances of being poor too often depend on the lottery of geography. Here are the 10 best and worst states for lifting poor children out of poverty.

Research shows children growing up poor are less likely to grow up healthy and succeed in school and more likely to be poor as adults. While the latest numbers show we have one million new reasons to celebrate, we must keep going and finish the job of ensuring a level playing field for every child. I hope everyone is going to get out and vote and demand that our leaders create jobs with living wages, increase early childhood investments and create a quality early childhood system, equalize funding for all of our schools, and make sure all children have a decent place to live.

The Children’s Defense Fund will be releasing our agenda for ensuring hope and opportunity and a moral equitable future for every American child shortly — and we must all make sure that children are at the top of the agenda for candidates for any office who receive our vote.

Marian Wright Edelman is President of the Children’s Defense Fund whose Leave No Child Behind® mission is to ensure every child a Healthy Start, a Head Start, a Fair Start, a Safe Start and a Moral Start in life and successful passage to adulthood with the help of caring families and communities. For more information go to www.childrensdefense.org.